How Do Solar Panels Work?

Solar panels work by harnessing the natural power of the sun; allowing photons (or particles of light) to knock electrons free from atoms which generates electricity. Solar panels are made up of photovoltaic or solar cells that convert sunlight into a direct electrical current which can then be used to power electronic systems.

Photo-voltaic cells are created by using two pieces of semiconducting materials such as silicon, one piece of which is given a positive electrical charge and other, a negative charge, which then creates an electric field. Excess electricity generated during periods of sunlight can then be channeled to a battery storage system, and retained for use at night.

For the photo-voltaic cells to function, they need to create an electric field. This is similar to creating a magnetic field, where polar opposites create a reaction. Opposite charges need to be separated in order to make an electric field between the two slices of silicon. To do this, one half of the materials has to have a positive electrical charge and the other negative to conduct electricity.

To explain the concept further, manufacturers of solar panels will add phosphorus to the silicon on top of the cell. This gives the top layer a negative charge caused by having extra electrons.

Then bottom layer then has boron added, giving it a positive charge and fewer electrons. When the two layers are together and a photon from the sunlight hits an electron, the energy between the two layers forces the electron out of the photovoltaic cell.

Once the charged electrons are forced out of the cell, they are transferred along a set of wires after being collected by the bordering metal conductive plates. At the end of the process you have electrons that resemble regular electricity and can be used to power any number of devices and electronic items including lighting systems. 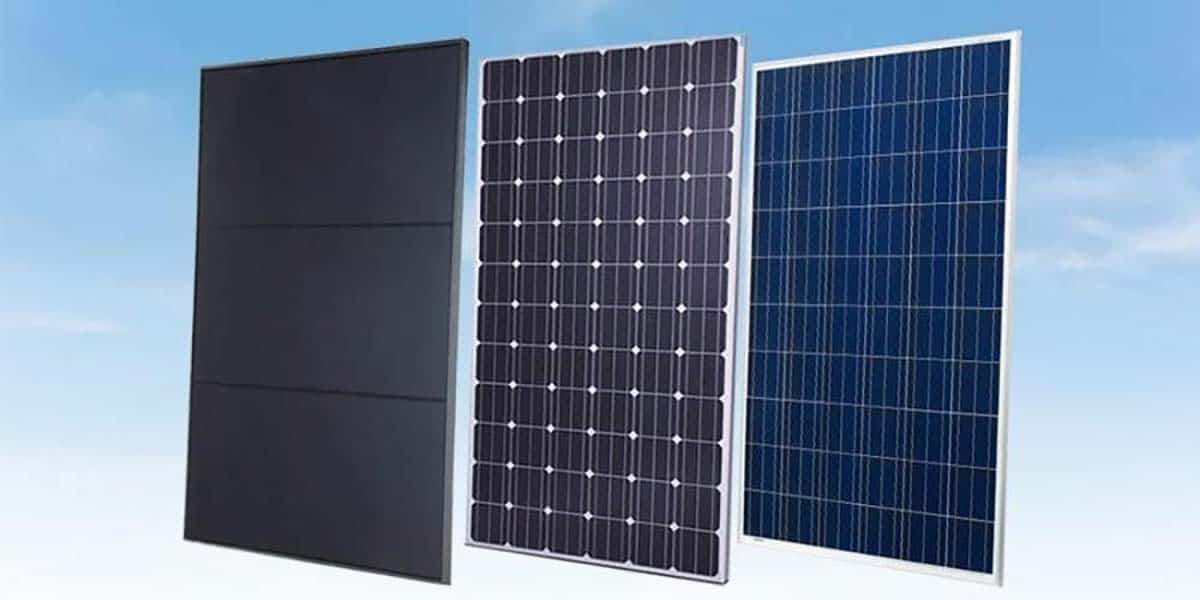 Solar panels are made up of photovoltaic or solar cells that convert sunlight into a direct electrical current which can then be used to power electronic systems.

Solar cells are created by using two pieces of semiconducting materials such as silicon, which is then shaped into evenly sized cells. 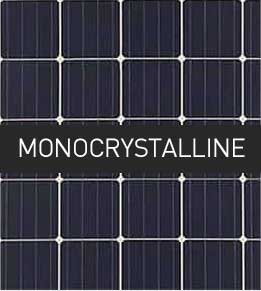 They also perform better in high heat and lower light environments, which means they will produce closer to their rated output in less than ideal conditions. However, they are more expensive to produce, and that cost is reflected in the retail price.

The manufacturing process for mono panels also results in more silicon waste than poly panels. Mono panels are cut from square silicon wafers with the corners shaved off, which creates a white rhombus shape between all-black cells. 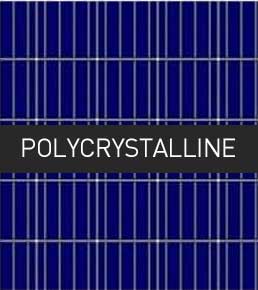 Polycrystalline solar cells are created by blending multiple pieces of silicon together.

They are molded into shape and treated to create the solar cell. Very minimal amounts of raw materials are discarded in this process, making it more efficient to manufacture.

But when it comes to power capacity and performance, they are slightly less efficient at generating electricity. This is due to the imperfections created in the surface of the solar cells, through blending different bits of silicon together.

However, the manufacturing process is cheaper compared to mono panels, which means they cost less to purchase retail.

The blended silicon is what creates the easily recognizable dark blue cell colour. Upon closer inspection, texture and colour imperfections in the cells are able to be seen. 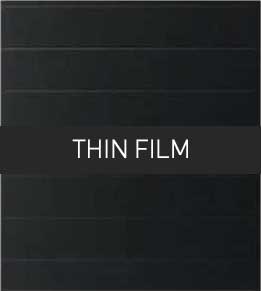 Most solar panels that are manufactured and used today utilise either monocrystalline or polycrystalline solar cells. However, there is a third type of solar panelling, known as thin film panels. Due to the way the panels are created, it is a far less efficient but much more affordable option suited to large scale projects.

This type of solar panelling is rarely used in domestic installations, as residential roof space often has a small surface area. In this instance, mono or poly panels are the better option to maximise energy production with limited available space. In situations without any space restrictions, thin film solar panelling becomes a more cost-effective option to roll out on a larger scale.

Thin film panels are created by meshing a thin layer of silicon on to a backing plate made of glass or plastic, the latter creating flexible solar panels. This is ideal for mounting to a curved surface.

In order for a solar cell to function and generate an electrical current, two pieces of semiconducting materials such as silicon are needed. One piece is given a positive electrical charge and other, a negative charge, which then creates an electric field. There are two types of solar cells that utilise either a positive or negative charge, which are explained below.

What are P-Type Solar Cells?

P-type cells are usually made with a silicon wafer coated with boron. Since boron has one less electron than silicon, it produces a positively charged cell, which attracts negatively charged electrons to it.

P-type cells are cheaper to manufacture and as a result, more widely used for solar panels. The downside of this type of solar cell is that it is affected by light-induced degradation (LID), which causes an initial 2-4% drop in cell efficiencies.

What are N-Type Solar Cells?

N-type cells are coated with phosphorus, which has one more electron than silicon, making the cell negatively charged. The benefit of using this treatment is that N-type cells are not affected by light-induced degradation (LID).

As a result, these are considered a more premium option because they degrade less over the life of the panel.

Majority of Green Frog Systems solar lighting products use P-type sells, which degrade marginally faster than N-type cell technology, but can still perform well for over 30 years. Most customers prefer to compromise a small reduction in efficiency for a more affordable module.